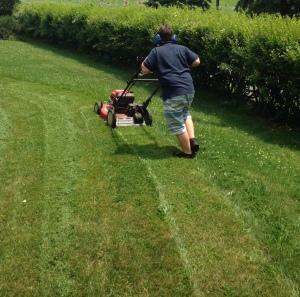 I decided this was the summer that my sons would learn to cut the grass. They would take over a job I’ve been doing since I was 12. It’s a task that’s half tedious and annoying, half meditative and relaxing. I’ve been looking forward for years to pass the reins.

My younger son embraced the challenge, but he’s an independent type, one who doesn’t like to be told “the best way” to do something, even if he’s never done it himself. Therefore, there are little mohawks and tufts of grass that didn’t get cut because my directive to overlap each row went unheeded. The tracks run a criss-cross haphazard path rather than the orderly farmer’s rows I create each time I go out to mow.

As I watched him work, growing impatient at times to be finished (how I know the way that last twenty minutes seems to drag out!), getting frustrated when he got into corners it was hard to get out of, and altogether missing a few areas, I thought how much easier it would be to do it myself. I could keep cutting the grass — it’s only an hour a week, and only for those few precious months of summer.

I could do it myself and look out my windows at a yard mowed by someone with years of experience, or I could put my perfectionism aside for the more important goal of seeing my son learn how to do something better with practice (there were fewer mohawks the second time). I can appreciate his pluckiness – even though his arm isn’t quite long enough yet, he wants to try to start the mower himself each time.

I don’t even remember how I learned to cut the grass. Knowing my dad, he probably just sent me out and said “figure it out,” which is how I got so good at doing a lot of different things. I can show my son that I have that same confidence in him that my parents had in me. When my sons do a cleanup job that wastes paper towels, at least they are cleaning up, and when the grass isn’t cut perfectly, it’s still getting cut, and that’s good enough for me.