Life’s been a little too heavy lately, so I decided to lighten things up with some fluffy psychoanalysis of a few of my many houseplants.

This is the one that plays dead if it doesn’t get watered a few times a week. Even though I feel guilty anytime I come home from work to see the leaves drooped down to the table, this plant is the canary in the coal mine that reminds me to water everything else because it’s the first to complain.

Next, we have THE PHOENIX.

If ever a plant arose from the ashes, it’s this one. I rescued it at work from an empty office where it had been sitting abandoned for months without any water. It was down to ONE living leaf. A few years later, this super plant is so voluminous that I can’t even move it because it has many trailing stems of leaves. 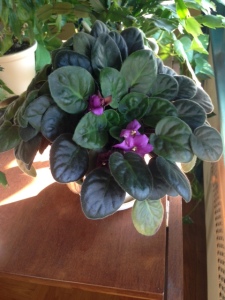 Okay, he’s not 969, but this African violet is fifteen or more years old. I saved this one from my mom (she’s a houseplant killer) when she received it from a friend as a condolence gift after my father died. It survived a family move and has been repotted (only because it fell on the floor and the pot smashed). I don’t even bother to fertilize plants, so I have to give this guy credit for blooming multiple times a year for weeks at a stretch. He’s got good genes.

Say hello to the ever-ugly PERSNICKETY.

This tree was a gift from my brother and sister-in-law, who have a beautiful, graceful version of the same plant. It’s supposed to be “low maintenance,” and at first it was. I put it in a corner, watered it about twice a month, and generally forgot it was there because it didn’t grow AT ALL. One nice spring day, I thought it would enjoy a little outdoor time. Apparently not. I brought it inside after a day of frolicking in the sun, and the leaves were already starting to turn black. Sunburn? Since then, it’s never been the same. It drops leaves until I think it’s about to die, but I swear it knows when I’m about to throw it in the garbage and has the good sense to sprout a few new leaves to keep me in a state of false hope. This tree is my teacher; I consider myself “above average” in houseplant husbandry, and this is my only failure to date. Oh well; you can’t reach them all, they say.

And finally, I SWEAR IT’S REAL, EVEN THOUGH IT LOOKS FAKE.

I have had this plant for more than two years now, and in that time, it has never gotten larger, dropped a leaf, or showed signs of distress during periods of drought (i.e., me forgetting it was there and not watering it for a month).

I’d love to see a picture of your favorite (or ugliest) houseplant!

If you enjoy reading my blog, please check out my first novel, Giving Myself Away, about a divorced mom making tough choices and a fresh start.